What If 'They' Silenced Bernie Sanders? | Mickey Z. 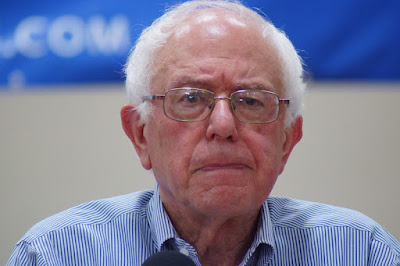 There's no shortage of righteous outrage on the Left (sic).

Plenty of marches and manifestos to go along with the myriad calls to “occupy” this or “take back” that. Toss in the occasional fighting words and the intermittent flirtation with property damage and the left typically does just enough to accomplish nothing except get itself effectively demonized by the mainstream (thus making it that much easier for the Blue Bloc of law enforcement to get away with virtually anything at the next big protest).

So, here's my question: What would those who identify as leftists do if one of their high profile icons were openly removed from the scene? For the sake of argument, let's say the U.S. government (or one of its proxies) -- with the full support of the corporate media -- overtly silenced Bernie Sanders for his “political revolution” and recent anti-Wall Street rhetoric.

(Let me clarify something before you before you pollute the comments section to rant about #FeelTheBern. I'm neither endorsing nor condemning Sanders; I'm simply recognizing his current mythical status. In a society as heavily conditioned as ours, Bernie might as well be Che fuckin' Guevara. In other words, choosing the nation's best-known “revolutionary” as a target would equate to nothing less than the government declaring war on “dissidents” of all stripes.)

So, what would the American left wing do if Sanders were deported like, for example, Emma Goldman? What if he was denied a fair trial and imprisoned like, say, Mumia Abu-Jamal? What if he was publicly executed even in the face of massive protests, e.g. Sacco and Vanzetti, Julius and Ethel Rosenberg, Tookie Williams, or Ken Saro Wiwa? How about a straight-out hit job along the lines of Fred Hampton?

Pick your poison; it doesn't matter how he's silenced. The question remains: What if the U.S. government (or one of its proxies) transparently eliminated Bernie Sanders for his recent political rhetoric? Would we see anything more than a flood of tweets, memes, hashtags, articles, blog posts, t-shirts, celebrity photo ops, and symbolic profile photo switches? Would the reaction go beyond asking the state for permission to “shut shit down” and agreeing beforehand how many of those protestors will consent to be arrested? Would we dare risk more than holding handwritten signs in Zuccotti Park or crowdfunding yet another “peoples’” newspaper?

If not, emboldened by the ease with which Bernie’s eradication was achieved, the government might then toss a few more high profile “dissidents” into prison for treason. More protests, more outrage, more symbolic arrests, more hashtags. Undaunted, Corporate America pulls its advertising dollars from “liberal” TV shows and forces all of them off the air. In response, 500 new trending hashtags emerge and the "Free Comedy Central" website registers nearly three million hits a day until it’s mysteriously hacked and removed. Hell, considering how little they have to fear, why wouldn’t the 1% next go all out and straight-up invade Cuba to get their hands on Assata?

Marveling at the sheer lack of resistance, the powers-that-be move on to declare Black Lives Matter to be a domestic terror threat and the color-coded alerts would go haywire as they initiate mass arrests of alleged terrorists, culminating in the bombing of several suspected safe houses, leaving dozens dead. (Not possible, you say? Ask the folks at MOVE.)

We know the general public would say the same thing they say every time a new "security precaution" is instituted: "If it makes us safer, I'm all for it." But… how do you think lefty activists (sic) and thinkers (sic) would react? Could/would they do anything to stop this long-predicted onslaught?

This is not a facetious question, an accusation, or an ill-advised attempt at satire. I'm genuinely curious: What do you think purported radicals, progressives, liberals, anarchists, socialists, communists, revolutionaries, and all such fellow travelers would do if the U.S. government (or one of its proxies) -- with the full support of the corporate media -- silenced Bernie Sanders for his recent political rhetoric?

What If 'They' Silenced Bernie Sanders? by Mickey Z. is licensed under a Creative Commons Attribution-ShareAlike 4.0 International License.
Based on a work at http://worldnewstrust.com/what-if-they-silenced-bernie-sanders-mickey-z.