"We came out of the White House not only dead broke, but in debt."
— Hillary Clinton on Monday, June 9th, 2014 in an interview on ABC
Hillary has amassed a fortune of hundreds of millions since leaving the White House.

Here is how she did it:

“Clinton Performed Favors for Donors As Secretary Of State”
Clinton has used the Clinton Foundation as a way to fundraise where donors can gain access to political favors.  Raj Fernando donated between $1 million and $5 million and was appointed as International Security Advisor to the State Department by Cheryl Mills, Clinton’s chief of staff, despite having no experience in the field.
Favors were given to foreign leaders and Clinton Foundation donors such as the Sultan of Oman, Indian politician Amar Singh, and Russian’s Uranium One.

“The Clintons Made Millions From Speeches To Special Interests”
The Clintons made $153 million since 2011 giving speeches to special interests such as foreign governments, CEOs and lobbyists.


“Clinton Gave China Millions Of Jobs And Grew Rich In Return”
According to the Economic Policy Institute, after the U.S. normalized trade relations with China — as Clinton supported — 3.2 million U.S. jobs were displaced.  Bill Clinton received $56.3 million from speeches delivered in foreign countries including China.

“The Clintons Profited From Speeches To Chinese Interests While She Was Negotiating With China”
From  Peter Schweizer’s book Clinton Cash:  ‘at the center of U.S. Policy toward China was Hillary Clinton. At this critical time for U.S.- China relations, Bill Clinton gave a number of speeches that were underwritten by the Chinese government and its supporters. These funds were paid to the Clintons’ bank account directly, while Hillary was negotiating with China on behalf of the United States.’”

“Clinton Policy Is Motivated By 1,000 Foreign Donations That Weren’t Disclosed With The State Department”
A 2015 report by Ken Silverstein in Harper’s Magazine which notes, “The Clinton Foundation is a professionally structured money-laundering operation.”

“Bill Clinton Was Paid $750,000 From A Telecom Company Facing State Department Sanctions While Hillary Was Secretary of State, And Was Subsequently Spared”
The Swedish Telecom Giant Ericsson that came under pressure from the United States for selling equipment to oppressive governments that would allegedly use the equipment to control their people.

“Clinton’s State Department Approved The Transfer of 20% Of America’s Uranium Holdings To Russia, While Investors Funneled $145 Million To The Clinton Foundation”
Clinton Cash reveals a connection between the United State’s uranium holdings with Russia’s Uranium One to $145 million in donations to the Clinton Foundation.


“Clinton Accepted Gifts From The Government Of Brunei As Secretary Of State As Brunei Pushed Sharia Law”
“Hillary Clinton accepted $58,000 in jewelry from the government of Brunei when she was Secretary of State – plus millions more for her foundation. The Sultan of Brunei has pushed oppressive Sharia law, including the punishment of death by stoning for being gay. The government of Brunei also stands to be one of the biggest beneficiaries of the Hillary supported Trans-Pacific Partnership.

“Hillary Took $25 Million From Saudi Araba, Where Being LGBT Is Punishable By Death”
The Kingdom of Saudi Arabia donated millions to the Clinton Foundation. Homosexuals are legally stoned to death in Saudi Arabia and women in Saudi Arabia are violently discriminated against.

"We hang petty thieves and appoint the great ones to high office."
Aesop 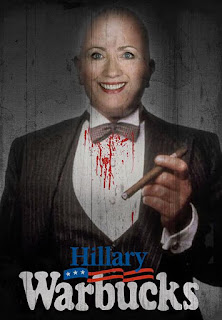