The "Help-This-Hurt-Child-Photo-Psy-Op by Anthony Freda 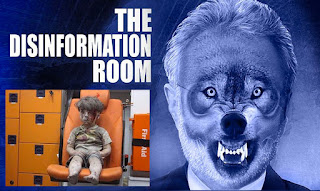 An image of a wounded boy is being promoted in the discredited mainstream media together with a tragic story from "activists" in a neighborhood in al-Qaeda occupied east-Aleppo.

According to the state sponsored media, "Russian or Syrian regime airstrikes" are to blame for this act of brutality against an innocent child.
https://www.washingtonpost.com/news/worldviews/wp/2016/08/17/the-stunned-bloodied-face-of-a-child-survivor-sums-up-the-horror-of-aleppo/?tid=pm_world_pop_b
A shell-shocked boy seemingly wounded, sits quietly in a pristine ambulance. At one point he touches a wound on his head. He does not react to that touch.
.
The two-minute video from which the still picture is taken, shows the boy being handed from the dark above to an "official" person and carried into the ambulance.
There he mutely sits as the camera rolls in this photo-psy-op.

The mainstream narrative is as follows:
Mahmoud Raslan, a photojournalist who captured the image, told the Associated Press that emergency workers and journalists tried to help the child, identified as 5-year-old Omran Daqneesh, along with his parents and his three siblings, who are 1, 6 and 11 years old.
"We were passing them from one balcony to the other," Raslan said, adding: "We sent the younger children immediately to the ambulance, but the 11-year-old girl waited for her mother to be rescued. Her ankle was pinned beneath the rubble."
An internet search for "Mahmoud Raslan", the claimed "photojournalist", finds no other pictures or videos attributed to that person.

There are currently fifty wars waging across the bloody planet Earth. Children become casualties of war every hour of every day.

Ask yourself why you never see the child victims of U. S. airstrikes, or the bombings of our allies.

When they feature a dead or wounded kid in heavy rotation, there is an agenda.

Usually, the aim is to stir up the emotions required to manufacture your consent to a new war.

The parts of yourself that you despise are projected onto a target as your private demons become public enemies and the state can kill with impunity, transforming murder into patriotism.

There probably is no image more effective at tapping into our tribal psyche than a hurt or dying child. How can we help this poor kid? The state has a ready-made answer.

Hundreds of thousands of kids have been killed or wounded by US bombings in this century alone. How many have you seen on the "news"?

Have you seen one photo of the kids killed by US aggression in Afghanistan, Pakistan, Yemen, Syria, or Somalia appearing in a war-justifying, mainstream newspaper?

In 1972, a shocking photo of a girl who was a victim of a napalm bombing raid on Trang Bang, Vietnam, appeared on the front page of The New York Times.
The Pulitzer Prize-winning photograph of Kim Phuc by AP photographer Nick Ut proved to be very effective in exposing the true horror and immorality of the Vietnam War and helped turn public sentiment against US aggression in the country.
Would such a picture make its way to this powerful platform in today's landscape of state and corporate sponsored media?

(Remember, The New York Times helped promote the lies that took us to war in Iraq.)
Publishing such emotionally charged, shocking images can be used to help end a war, but much more frequently, they are used to demonize an enemy and provide pretexts for a new war on "humanitarian" grounds.
We never see the results of US-inflicted carnage, because a major function of the war-promoting media is to remove all guilt and moral responsibility for our country's actions and affix blame and evil elsewhere.
The excuse for putting these visual documents of war into memory holes is often that the images are "too provocative," yet the same media outlets enthusiastically promotes clips of evil-doers doing evil things when it suits their agenda.

When you see dead or wounded kid on the enemy media,

Anthony Freda
www.AnthonyFreda.com
It is no measure of health to be well adjusted to a profoundly sick society.
Jiddu Krishnamurti