Kaepernick and the Blood Splattered Banner by Cindy Sheehan 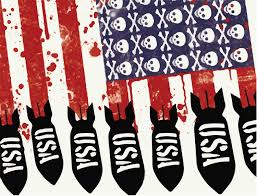 About three months after my son Casey Sheehan was killed while being used as a “bullet sponge” by the US Army in the immoral and destructive US war against the people of Iraq, my then husband and I were invited to go to a minor league baseball game in Sacramento. The next day was my birthday, so we accepted thinking it may be a good outing to take our minds off of our immense grief and spend time with loved ones at a pastime that used to give us a lot of pleasure.

Patrick and I were to meet our friends at the game and we arrived a little late. As soon as we walked up to the gate the traditional playing of the Star Spangled Banner (SSB) commenced. I remember grasping some wrought iron fence posts as if I were going to fall into a black abyss, putting my head down and sobbing.

Of course, I have always thought the SSB is a horrible song sung to a horrible melody, but I had always dutifully arisen (no hand over my heart, though) to wait out the seemingly interminable (and often bad) singing of it to cheer “Play Ball” very loudly when it was over. However, on 9 July of 2004, as I sobbed, I knew I would never, ever show that song, or the flag it represented any more of my formerly misplaced respect. After all, one was folded and handed to me with all the formal pomp and somberness at the graveside of my oldest child. Since then, not only have all the patriotic trappings of this violent empire disgusted me, they remind me of the worst day of my life.

Even though I have been a lifelong baseball fan I have never really connected with football. Again, in the last 12 years since Casey’s death and my deepening anti-war and anti-Imperial work, I recognize football as a miniature war game that can cause it’s players real and lifelong damage due to traumatic brain injury and other traumas. However, since I live in Northern California in “49er Country,” I had heard of their talented yet disappointing quarterback, Colin Kaepernick. Imagine my surprise when “Kap” caused such a stir by not standing during the National Anthem and putting out this statement about it:

"I am not going to stand up to show pride in a flag for a country that oppresses black people and people of color. To me, this is bigger than football and it would be selfish on my part to look the other way. There are bodies in the street and people getting paid leave and getting away with murder.”

In the milieu of the NFL and its supporters, I believe that Kap’s stand was courageous, but long, long past due.

The SSB, written by Francis Scott Key during the Battle of Ft, McHenry in Baltimore during the war of 1812 has deep roots in racism and “Frank Key” was a very close friend and in the Kitchen Cabinet of Indian Killer Andrew Jackson. Key was very much against abolitionists and their philosophy and believed that “negroes” were “mentally inferior” and therefore should be treated with more Christian kindness.

During the War of 1812 Frank Key was a Lieutenant in the US forces and was bested by a group of “Colonial Marines” who were a group of slaves who were promised freedom by the British forces for running away and fighting for the British. The third verse of the SSB reflects Key’s bitter distaste of the group:

And where is that band who so vauntingly swore,
That the havoc of war and the battle’s confusion
A home and a Country should leave us no more?
Their blood has wash’d out their foul footstep’s pollution.
No refuge could save the hireling and slave
From the terror of flight or the gloom of the grave,
And the star-spangled banner in triumph doth wave
O’er the land of the free and the home of the brave.

The Colonial Marines were an affront to Key’s views about slaves being morally inferior and he was offended by the bravery of some to have the temerity to fight for their freedom.

The terror of police violence against Afro-American communities and other people of color is real and I am sure Kap was inspired by the Black Lives Matter movement to sit down in his belated protest against oppression, but when has the US ever NOT murdered and oppressed these “demographics?”

The Blood Splattered Banner “waves” over the occupied lands of almost 200 countries where the US military maintains a military presence, whether large, or small; active bombing, or a more quiet, but unyielding and potentially violent force.

The Blood Splattered Banner rode in the front of the invading forces from US cavalries that exterminated native populations— never distinguishing between warrior, or woman; young or old. The bloody flag waved over Wounded Knee and Sand Creek where the human gore was knee deep and the feeling of “moral superiority” of the genocidal troops over the people they slaughtered precisely echoed Scott’s views about slaves and the same justification the Empire uses against Islam now and communism earlier.

One of the great ironies about the brouhaha over this is that it has been proven that the Pentagon pays tens of millions of dollars to the NFL every year for “patriotic” military recruitment product placement, AND the NFL is income tax exempt. Maybe if any of us were benefitting so handsomely by pretending to be patriotic, we would also push the anthem and fake umbrage against principled protests.

So many centuries of imperial violence and many millions of ruined lives later, one football player sits down and the commentary is around “disrespect” of the other players, fans, and veterans (who don’t ever fight for freedom, but for profit and psychopathic dominance) and not around the profound reasons to never stand during the bigoted song, or to salute the bloody flag of empire.

This article first appeared in the Revolutionary Organization of Labor Newsletter #98.