The Russians are Coming!!!! by Anthony Freda 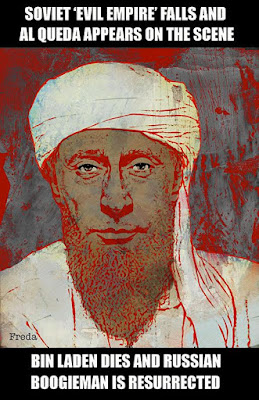 In a bizarre and reckless resurrection of Cold War hysteria, Hillary and the corporate media are seeking to blame the Russians for hacking into the DNC, compromising the election process and trying to start WW3.

Of course, they present Zero evidence to prove their conspiracy theory, but the new "Red" Scare is on.

Former high ranking NSA officer, William Binney says it was US intelligence, not the Russian boogieman who have been intercepting and retaining data illegally.

Despite what the discredited Clinton News Network says, The NSA has all of Clinton’s emails and the FBI could gain access to them any time they wanted.

No need for Trump to ask Pooty-Poot for those emails, he can just call on the FBI or NSA to hand them over.

All of this finger pointing seems to be designed to demonize Russia as a means to pre-condition the public to armed conflict with our perennial "enemy".

The “no fly zone” that Clinton wants to impose over Syria would mean war with Russia from the very second it was implemented since, under U.S. military doctrine, it requires the immediate destruction of all “enemy” air defenses.

That was a relatively easy assignment for NATO forces in Libya, in 2011, but Syrian airspace is now guarded by the world’s most sophisticated defense systems, manned by Russian operators, guarded by Russian Marines, and backed by Russia’s strategic nuclear forces.