The Return of the Angry Demo-lib by Cindy Sheehan


I was truly stunned on (S)Election Day 2016 because I was certain that Hillary Clinton had been anointed by the ruling class to be the next CEO of Empire and the First Woman President™.

Without much training (but boatloads of experience), I am a practically a political savant and am rarely wrong about such things, and Trump's "victory" did surprise me. What did not surprise me, however, was the Demo-lib's angry reaction to it.

The day before the "Cataclysm of the Century™" I wrote as a status update on Facebook: "My election prediction: If Trump wins, then the Democrat faithful will finally remember how to hold a president's feet to the fire."

If you were on the outside looking in in 2008 (not jitter-bugging on the discordant Obama bandwagon), then you will know what I am talking about. Over and over and over and over again, I was told by those that are Olympic level Bandwagon Jumpers that we just needed to get Obama in office then we would "hold his feet to the fire." Well, with just a cursory review of the past eight years: every country decimated, every person killed, every cop exonerated, every pipeline built, every whistleblower punished, every Wall Street bank bailed out, every immigrant worker deported, every homeless person, and everyone who still has no health coverage, etc: THERE WAS NO FIRE HOLDING WITH RESPECT TO OBAMA'S FEET.

(Read this about the Obama's immoral and unconscionable destruction of Yemen:

True, there were isolated pockets of protest and Occupy Wall Street and Black Lives Matter could really have made some headway against Empire, but if there were a couple of thousand of people at a protest in WashedUp, DeCeit against any of the half a dozen wars of Empire that Obama is waging, we were lucky. The last one I organized in DeCeit in 2015 had about 250 people.

Not only are the Demo-libs out in force and have been since November 8th, they are holding Trump's "feet to the fire" and demanding impeachment even before he is President. All this despite the urging of Obama and Clinton to forget all the nasty things they said about Trump recently and to "come together" for the "sake of America."

I think that every president has committed impeachable offenses and would be on board for an "Impeach Obama" movement as I was for an "Impeach Bush/Cheney" movement, and will be for an "Impeach Trump" energy, but all of the protests lately only prove my at least 10 year contention (since the Dems regained control of the House in 2006), that the protests against Bush and his wars were not principled, but only "anti-Bush."

I also wrote this on Facebook on the day after Cataclysm of the Century™ Day:


So, we who didn't vote for Clinton were feeling our "privilege" because we have "nothing to fear" from a Trump regime? So does that mean that the people who voted for Clinton are exhibiting their American Privilege...most of the millions of people who have been murdered, wounded, or made refugees by Clinton's support for wars, wars, and more wars are not Anglo-Saxon Protestants. Did you feel comfortable in your American Privilege that you had "nothing to fear" from a Clinton Regime? I voted against Clinton for those people and I was thrilled to vote for a Latina (Gloria La Riva) and someone I know who has been in the trenches with me all along.

I understand the anger over Trump's election, but the same people would not be out in force if the war criminal Clinton had won, and that's a pity, because she was a terrible candidate and was no prize, herself.

I remember being furious when Bush seemingly prevailed over the terrible candidate and terrible person, John Kerry in 2004. But I equated votes for Bush as votes in support of the war that killed my son just seven months earlier, and I think I was partially correct. People who voted for Clinton last week, for the most part, refused to honestly examine the fact that almost every famous neocon supported her and that her foreign policy experience was as evil as the men who went before her. 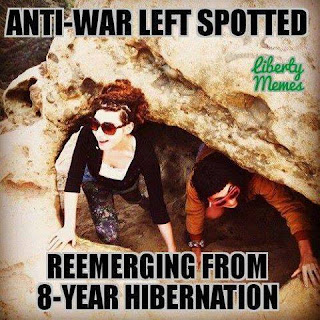 I am not happy that Trump will be crowned as the New Emperor, but I am also not sad that Clinton lost. However, will this fact now leverage into Demo-libs spending a lot of money opposing Trump's inevitable wars (or not ending Obama's) and their sudden recall of how to paint clever protest signs and the way to the nearest march?


I also think it's important to remember that ALL U.S. presidential elections are not about D vs. R, but about Them vs. Us. It's about divide and conquer and the fervent hope that the so-called rulers can keep the workers fighting each other and not noticing how they are killing our planet and robbing the future blind.

Both Trump and Clinton were representatives of the elite class, only Trump's campaign was able to capitalize on the issues that Occupy Wall Street brought to the fore and which the campaign of Sanders also opportunistically jumped on. Clinton stubbornly remained in her comfortable elitist enclave with the arrogance of inbred royalty and refused to acknowledge the deep fear and dismay of the working-class in this country. No matter who or what she or the Demo-libs want to blame, it was her festering ambition that cost her the election.

Look, we USAians must be a hellishly tough lot: we've already survived 44 presidents, I have a feeling we will also survive this one. However, you all have to stop thinking that 330 million people are the goddamned center of the known universe. We share this planet with 7 billion others and use over 1/4 of its resources and maintain almost 1k military bases across the globe.

We need some kind of identification as being connected with everyone and everything--or nothing will change for the better.