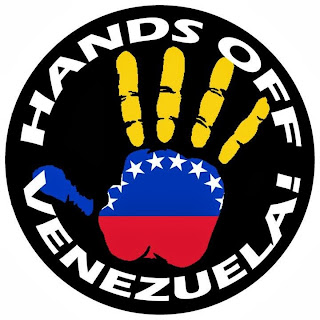 The dangerous media campaign based on lies and deceptions about what is occurring in Venezuela today has grown at the same time that the United States and their allies have increased their meddling in the internal affairs of Venezuela. In turn, the violent and counter-revolutionary opposition in Venezuela has also amplified their attempts to overthrow the government of President Nicolas Maduro and with it the gains made by the people of Venezuela over the last 17 years of the Bolivarian Revolution.

Venezuela is a country with a population of 30 million people, located in the Northern section of the continent of South America. Caracas, the capital city of Venezuela is 3,300km away from Washington, DC, so why is it that Venezuela is so important to the United States and mainstream media?

In 1998 the people of Venezuela elected Hugo Chávez as President, marking the beginning of the Bolivarian Revolution that since then has struggled to overturn centuries of injustice and inequality faced by a majority of Venezuelans. With this victory, the government of Venezuela and the Bolivarian revolution began to make changes that fundamentally improved the lives for millions of poor, working and oppressed people in Venezuela. Poverty decreased dramatically, illiteracy was eradicated, and millions of Venezuelans saw a doctor for the first time, among other great gains for the people of Venezuela. For the first time in Venezuelan history, the government put the interests of people before those of profit.

President Hugo Chávez passed away in 2013, however the Bolivarian revolution continues led by government of President Nicolás Maduro, the United Socialist Party of Venezuela (PSUV) and the tens of thousands of communes, grassroots organizations and civil society groups that carry the gains of the revolution forward. Despite a dramatic drop in the price of oil, Venezuela’s main export, as well as attempts by the counter-revolutionary opposition to destabilize Venezuela through violence and an economic war, the Bolivarian revolution has continued to make tremendous gains for people, both in Venezuela and across Latin America.

Many of the gains of the Bolivarian revolution have come as a result of Social Missions in Venezuela. For example, the social mission for community health, known as Barrio Adentro has brought primary healthcare to the most vulnerable people of Venezuela, many of whom had never once in their lives seen a doctor. Through this mission, Cuban and Venezuelan doctors continue to give free doctors visits, completing over 700 million consultations as of 2015.

In October of 2016, Venezuela marked 11 years as a territory free of illiteracy as declared by the United Nations mission UNESCO. Through the literacy missions more than 2.7 million Venezuelans have been taught to read, including almost 70,000 indigenous peoples who learned to read not only in Spanish, but also in their native languages.

The Bolivarian Revolution has also committed to providing dignified housing for people in Venezuela through the Great Housing Mission which began in 2011. Since then, over 1.2million homes have been constructed and provided to low income Venezuelans.

Venezuela has been recognized for their achievements by the United Nations Food and Agriculture Organization (FAO). In 2015, the FAO announced that Venezuela had reduced malnutrition 50%, following their announcement in 2013 that extreme hunger and poverty in Venezuela had also been reduced by 50%, all major milestones in the UN’s Millennium Development Goals.

The Bolivarian Alternative for the Americas (ALBA), which was founded under the leadership of Hugo Chávez, also continues to be an institution to facilitate Latin American solidarity and cooperation. For example, through ALBA over 3 million people in Latin America have had their eyesight restored for free, as ALBA allows for trade between countries through goods and services, as well as through monetary exchange.

In October, further announcements have also been made about the formation The Bank of the South. This new bank will begin with a budget provided by the governments of Bolivia, Ecuador and Venezuela and will work to end the cycle of debt that has been imposed on poor countries in Latin America for decades.

When President Hugo Chávez passed away in 2013, the US government, and the violent and counter-revolutionary opposition that they support, saw an opportunity to increase their efforts to destabilize Venezuela and overturn the gains of the Bolivarian Revolution. In December, 2015 the opposition, organized into a coalition called the MUD won a majority in the Parliamentary elections in Venezuela. Since then, they have increased their efforts to bring about a counter-revolution. Although mainstream Western media paints a pretty picture of the Venezuelan opposition, in reality, the opposition in Venezuela is anything but a peaceful movement for “democracy” and “freedom.”

In fact, the counter-revolutionary opposition in Venezuela is no stranger to using violence in order to try and achieve their goals in Venezuela. Their methods range from a coup against President Chavez in 2002 (which was overturned by the mass action of people in Venezuela in less than 48 hours), to violent street riots known as the “Guarimbas” that killed 43 people in 2014.

The opposition in Venezuela has also strengthened their economic war against the people of Venezuela. The capitalist class in Venezuela, whose interests are represented in the counter-revolutionary opposition, continues to control a majority of the Venezuelan economy, including the distribution and production of food and basic goods. As reported in Volume 10, Issue 8 of Fire This Time, “As researched by Pasqualina Curcio, a Venezuelan economist and professor at Simón Bolívar University, ‘Both the production and distribution of the 10 most difficult foods to purchase, for which there are long queues (corn flour, rice, pasta, milk, oil, margarine, coffee, chicken, beef and chicken eggs) are concentrated in no more than 10 large private companies’ www.foodfirst.org.”

As well, reports continue to surface that expose hoarding and sabotage by privately owned Venezuelan and multi-national companies. On October 27, the Venezuelan news site La Tabla reported that Venezuela’s largest private producer of basic goods, Polar, reduced its overall production by 30% between July, 2016 and today. The counter -revolutionary capitalist class in Venezuela is manipulating the supply of basic necessities to the people of Venezuela in a violent attempt to starve the people of Venezuela into overthrowing the government.

There is another important deception that mainstream Western media is carrying on about Venezuela, the lie that the current government of Venezuela is somehow undemocratic and in violation of Venezuela’s constitution. This claim has been repeated over and over especially as the attempt of the opposition to launch a recall referendum against President Maduro has now been put on hold. However, the reason that the recall referendum was suspended by the National Electoral Council on October 21 is clear and well-within the constitution of Venezuela, a fact that is never mentioned in the media. The opposition simply did not collect enough signatures to proceed after it was found that 30% of the nearly 2 million signatures collected had irregularities. This included, for example, 11,000 signatures from deceased people.

‎President Maduro and the Bolivarian Revolution Confront the Opposition

“People here have a need to work and produce and we will not allow a Yankee model of destabilization to install itself here in Venezuela” – President Nicloas Maduro, October 26, 2016

On Wednesday, October 26, President Nicolas Maduro announced that the government of Venezuela would be taking further steps to nationalize idle factories in Venezuela that are found to be complicit in economic sabotage.

This is just one of the many initiatives taken by the government of the Bolivarian Revolution in order to combat the economic war and violence of the counter-revolutionary opposition; steps that mainstream Western media has largely ignored. Other important measures include the raising of the minimum wage by 40%, as well as the introduction of new methods for the distribution of basic goods to communities across Venezuela, known as CLAPs (Local Production and Provisioning Committees).

The government of Venezuela’s commitment to continue improving the lives of the majority of people in Venezuela can also be seen in the recent 2017 budget. 73% of the total state budget will be allocated to Venezuela’s Social Missions, public works and neighborhood organizations known as communal councils, with much of the budget funded through tax increases to the wealthy.

Not only does major media not report at all on the steps taken by the government of Venezuela to fight back against the economic crisis and scarcity, they have also been relentless in their claims that Venezuela is facing a “humanitarian crisis.” This claim was refuted outright by executive secretary of the United Nations Economic Commission for Latin America and the Caribbean (ECLAC), Alicia Bárcena in a recent interview with the news agency Sputnik in which she said, “The country is not in a humanitarian crisis, definitely not, we must be clear. There is a shortage of certain products and political tension, but Venezuela still has many elements to be a vibrant country.”

US Hands Off Venezuela!

On October 24, 2016, the Washington Post wrote yet another editorial calling for foreign intervention in Venezuela stating “The regime won’t change course unless it comes under far greater pressure, from the streets or from external sanctions. If it wishes to head off still greater turmoil in Venezuela, the United States should be coordinating tough international action.”

As if what the US government is doing already isn’t enough intervention. From trips to US Congress by leading members of the opposition, to e-mails from former Secretary of State Hillary Clinton showing US spying on Venezuelan state-owned companies, the fingerprints of the US government are all over the counter-revolutionary actions of the opposition. Through funding by US groups like the Agency for International Development (USAid), a paper trail is there too.

On top of this political and financial support for counter-revolution in Venezuela, the US government has also declared, in 2015 and again in 2016, that Venezuela “an unusual and extraordinary threat to US national security,” and imposed economic sanctions. These measures have hampered Venezuela’s ability to work with international and US financial institutions, greatly deepening the impact of the severe drop in oil prices on Venezuela’s economy.

Venezuela Needs Our Solidarity Now More Than Ever

Today President Nicolás Maduro, the PSUV, and all of the forces that make up the Bolivarian Revolution are facing some of their biggest challenges yet. Although there is still much that can be done to bring full justice and equality to the majority of people in Venezuela, through mass organization and mobilization the Bolivarian Revolution continues to advance in the struggle for a better Venezuela and a better world. As the people of Venezuela continue to build their revolution, the most important thing that people living in imperialist countries can do is to get the pressure of US intervention and meddling off of their backs.

The struggle between revolution and counter-revolution in Venezuela has taken many forms. From an economic war to violent street demonstrations, to the latest attempt of the opposition in the National Assembly to declare the President of Venezuela unfit to rule, it is clear that the solidarity of people around the world that support the Bolivarian Revolution is needed now more than ever.

FIRST APPEARED IN FIRE THIS TIME
Posted by Cindy Sheehan's Soapbox at 1:22:00 PM