Fidel: The Proof is in the Pudding by Cindy Sheehan 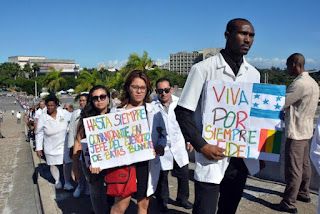 "The Cuban economy is a disaster. No, I do not praise Fidel Castro."
Sen. Bernie Sanders (I-Vermont) to Martha Raddatz (ABC)

Where to start about last week's death of 90-year old revolutionary, Fidel Castro?

Well, we'll get to the adverse propaganda soon, but to be clear, I admire Castro and I admire the people of Cuba and the Cuban Revolution. (Read my piece on the occasion of Fidel's 90th birthday.) Because I admire them, it does not mean I worship Fidel, or deny anything negative about him or Cuba. Was Fidel perfect? Is any person perfect? Despite any criticism of Fidel, we should evaluate Cuba today--the "pudding" as you will, or the Fruits of the Revolution.

A lot of people denounce the Castros and the Cuban Revolution because it was "violent." Needless to say, Fidel didn't set out to overthrow a utopian society. The revolution waged battle against a very brutal, US-backed mobster, Fulgencio Batista. As here in the US today, the gap between the rich and the poor in Cuba back then was immoral and the oppression was not supportable. 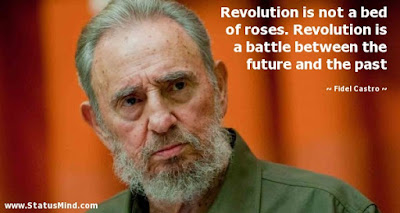 I ask if the elitist American Revolution that kicked the British out was peaceful and bloodless? Did the colonists revere the British loyalists and traitors? No, it was a bloody revolution and many poor people who didn't have a stake in the new country were exploited and used by the elites for their own gain. For the most part, the wealthy land and slave owners remained wealthy, and the poor foot-soldier remained poor. In 2016, the US has the world's largest  income disparity (according to the GINI coefficient) in the entire world, and I can only find speculative articles about Cuban income inequality and I cannot find GINI numbers, because the data is compiled with information from the World Bank and the Cuban Revolution withdrew from the dastardly World Bank in 1960.

When "Mr. Pot meet Mr. Kettle"--Sen. Sanders calls out the Cuban economy for being a "disaster" he does not go on to recount the vicious US blockade of Cuba that has persisted for over five decades. The US only tightened the blockade during the "Special" period in Cuba after the collapse of the Soviet Union when the people of Cuba needed the most help. In contrast, when Katrina struck New Orleans hard in 2005, the Cuban government had 75 doctors and supplies waiting on the tarmac in Havana to fly to Louisiana to help out. Of course, to punish Cuba, the Bush regime denied that help, which ended up greatly harming the mostly brown and black people of New Orleans the most.

Cuba's planned economy has not only managed to survive that blockade but provide excellent health, housing, and educational benefits to its citizens. Give me some of that "disaster!" Please!

According to its own CIA Factbook, Cuba has a lower infant mortality rate than the US and according to UNICEF, Cuba has a 0% child malnutrition rate due to the fact that food is a human right and not a privilege. According to the United States Department of Agriculture (USDA), 13.1 million children under 18 in the United States live in households where they are unable to consistently access enough nutritious food necessary for a healthy life.

Housing is also a human right in Cuba and there are no homeless.

Cuba not only has health care for everyone, but it operates a medical school that trains doctors from all over the world to go and practice in under-served and poorer communities (even in the US). Education is free through university and Cuba also has a higher literacy rate than the United States and no one is burdened with crippling lifelong debt after obtaining degrees in Cuba. Nor do poor people feel the obligation to join the military to receive an education while running the risk of killing or being killed, as in the USA.

I look at the United States which is waging at least a half dozen wars for resources and other financial opportunity in the Middle East and Africa and occupying about 130 countries with over 900 military bases, including one in Guantanamo Cuba which it refuses to close, and I note that Cuba is not militarily engaged in, or occupying one single country. Hmm....how "disastrous" a nation that puts people over the Military Industrial Complex. Again, may we have a portion of that "disaster" over here, please?

The police in Cuba carry no guns, compared with the 878 (according to the Washington comPost) USAians killed by cops here in the US, just in 2016, so far.  Additionally, the USA executes several dozen prisoners every year, where Cuba has not executed a prisoner since 2003 and all death sentences there were commuted in 2010.

I have been to Cuba about 1/2 dozen times now and every other country in the world (except for the US and its illegitimate little brother, Israel) has a healthy relationship with Cuba. Cuba welcomes tourists from all over the planet and now with travel restrictions being somewhat loosened by the US Imperial State, I hope more and more Americans get to travel there and find out how wonderful and gorgeous the island nation is and how much absolute bullshit they have had shoveled down their throats by the US government and toady media for decades.

To me, Fidel Castro Ruiz will be vindicated by history not only for his courage in defeating a dictator in 1959, but also for continuing for the rest of his life to fulfill the promises of the Cuban Revolution and for his love of all oppressed people.

I have no condemnation of Fidel Castro or the Cuban Revolution, but my question is, why do we put up with unconscionable oppression, poverty, war, and police state brutality here in the US? Who will rise up to defeat the mobsters in DC?


"The US government says that a socialist regime here threatens US security. But what threatens the security of the North American people is the aggressive policy of the warmongers of the United States ... We do not endanger the life or security of a single North American family.” -Fidel Castro, May 1961 (shortly after the Bay of Pigs invasion)