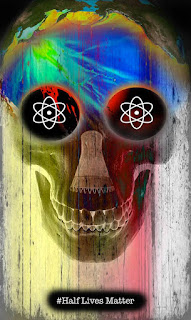 Nuclear power may be the most reckless and shortsighted technological misadventure in human history.

"It's a helluva a way to boil water"
Albert Einstein

Nuclear power was sold as a cheap and safe alternative to oil, but when you factor in the cost of storing and protecting the radioactive waste for thousands of years, the cost is absurdly prohibitive.

When you compute the risk/reward ratio, it is an utterly insane idea.

From building nuclear plants on fault lines as in Fukushima or in populated areas like Indian Point, the hubris of the technocratic planners is unfathomable.

The world's very first nuclear power station was erected in at Sellafield in the United Kingdom on the Cumbrian coast.
This facility pumped unknown quantities of high-level radioactive waste into the Irish Sea for decades without concern for the consequences to life on Earth.
By the 1980's Sellafield had exposed the whole of Europe to
" more radiation than the combined exposure of all nuclear sites, weapons testing and Chernobyl"
According to Oregon State University scientists.
The worlds largest stockpile of plutonium (28 tons)
currently sits at the site and the estimated cost of cleaning up the waste is 79 billion pounds.
They have not begun cleanup because they are not even sure how to safely go about it at this point.

The Hanford facility in the United States is one of the most irresponsible crimes of the technocrats in history.
(According to The New Yorker)
Between 1943 and 1980, Hanford released 6.3 trillion liters of liquid waste containing strontium, plutonium, cesium and 63 other toxic substances into the Columbia River basin.
Sometimes the releases were accidental, but most times they were intentional.
They were knowingly releasing significant quantities of radiation into the environment and then lying to the public about it.

There are many more similar, harrowing stories from all over the globe.

Some provocative films about this insanity can be seen on PBS here: