Four prominent activists and truth-tellers are debunking the Russian Hack conspiracy theory.
WIlliam Binney, Glenn Greenwald, Julian Assange and Ray McGovern All say that the story being told by the discredited, state/corporate fake news syndicate that Russia hacked US elections is not true.
These brave experts and whistleblowers say there is no evidence to back up the official narrative.
Why is this hysterical Russophobic and NeoMcarthyistic narrative being promoted by Obama, Hillary and their minions in the corrupt mainstream media?

Well, according to Assange, the reason is obvious.
"They’re trying to delegitimize the Trump administration as it goes into the White House. They are trying to say that President-elect Trump is not a legitimate president."

The same media and establishment that warns us of the dangers of alternative news is disseminating a fake news story that could provoke a nuclear conflict with Russia.

Binney was a RUSSIA specialist and worked in the operations side of intelligence, starting as an analyst and ending as a Technical Director prior to becoming a geopolitical world Technical Director. In the 1990s, he co-founded a unit on automating signals intelligence.
Binney's NSA career culminated as Technical Leader for intelligence in 2001. Having expertise in intelligence analysis, traffic analysis, systems analysis, knowledge management, and mathematics (including set theory, number theory, and probability), Binney has been described as one of the best analysts in the NSA's history.
(But what does he know?)

Greenwald has exposed illegal surveillance and the inner workings of the drone assassination campaign and kill chain as editor of The Intercept.
Greenwald is critical of actions jointly supported by Democrats and Republicans, writing: "The worst and most tyrannical government actions in Washington are equally supported on a fully bipartisan basis."
He is highly regarded as an independent investigative journalist and lawyer.
(But let's just say he is working for Putin)

Julian Assange has been exposing the crimes of the powerful via his non-profit organization Wikileaks since 2009.
He has exposed evidence of corruption and criminality of the Bush administration, Hillary Clinton and many more power-brokers.
His information has Never been disproven or discredited and is authentic. He is literally risking his life to bring us the truth.
(But let's trust the same media that lied us into the Iraq War and just say he loves Russia)

Retired CIA Sr. Analyst Ray McGovern, who gave presidents going back to Ronald Reagan the CIA’s daily briefing, and who co-founded Veteran Intelligence Professionals for Sanity (VIPS) calls the Russian Hack conspiracy theory  “a crock” — He says the claim that Russians and Vladimir Putin were behind the release of Democratic National Committee and Clinton Campaign Chair John Podesta’s emails, in an effort to give the election to Donald Trump is not backed up by any evidence.
(But let's call him Russian Scum)

None of these men are supporters of Trump or the Republican party, and neither am I.
Each of these men have a track record of honesty, credibility and objectivity.
The intelligence agencies, media and politicians who are promoting this Russophobic campaign have a record of mendacity and failure.
The same dark forces who fabricated the pretexts to bring us to war in Iraq are now engaged in a Neo-Cold-War-Red-Scare game.

http://thiscantbehappening.net/node/3402
Anthony Freda
www.AnthonyFreda.com
It is no measure of health to be well adjusted to a profoundly sick society. 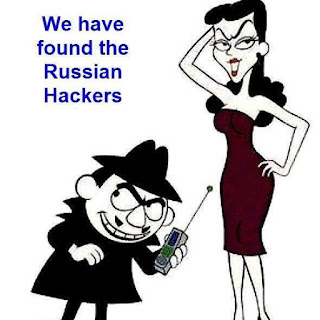