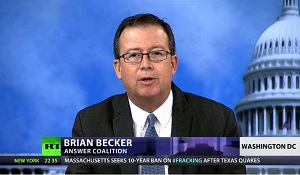 The People Speak w/Cindy Sheehan
and
The Soapbox
Present:

Brian Becker is the Executive Director of the ANSWER Coalition which has chapters in 25 cities in the United States. The ANSWER Coalition was founded immediately after the September 11, 2001 attacks in New York City and Washington DC. ANSWER was one of the primary organizations that mobilized of millions of Americans who protested month after month in the lead-up to the U.S. invasion of Iraq in March 2003 – and in opposition to the continuing US occupation of Iraq

Brian Becker is the author and co-author of numerous books on U.S. foreign policy. His latest book is “Imperialism in the 21st Century.” He is also the co-author of “Socialists and War,” “Genocide by Sanctions,” ‘China: Revolution and Counter-Revolution,” “Revolution Manifesto” and others. His articles appear regularly on LiberationNews.org website which is a news and analysis site of the Party for Socialism and Liberation (PSL). Becker is a founder of the PSL and a member of its Central Committee

He is currently the show host of a daily one-hour radio show/podcast called Loud & Clear for Radio Sputnik. The show is broadcast five days a week on radio stations, web sites and is also available as an iiTune podcast.

Founded just three days after the September 11, 2001 attacks, ANSWER (Act Now to Stop War and End Racism) initiated the massive U.S. antiwar movement opposing the U.S.invasion of Iraq in the months prior to March 19, 2003.

The ANSWER Coalition demonstration of 200,000 people on October 26, 2002, in Washington, D.C. ignited a nationwide and global antiwar movement that was nearly unprecedented in history. On January 18, 2003, 500,000 people packed the Mall in Washington, D.C. under the slogan “Stop the War Before It Starts.” The Washington Post described the January 18 demonstration as the largest antiwar protest since the end of the Vietnam War.

On February 15, 2003, many millions of people, in nearly every country in the world, joined together in the largest coordinated antiwar actions in history.

On April 12, 2003, just 3 days after the U.S. invasion force conquered Baghdad the ANSWER coalition organized a demonstration of 30,000 people in downtown Washington, D.C. under the slogan “Occupation is not Liberation.” This marked the beginning of a new stage of the U.S.antiwar movement which slowly regained its massive character as the resistance movement in Iraq made it clear that the occupation of Iraq would fail.

A distinguishing feature of the organizing principles and work of the ANSWER coalition, in contrast with the traditional U.S.peace movement was its uncompromising support in defense of the rights of the Palestinian people.

In April 2002, the ANSWER Coalition organized the largest demonstrations in solidarity with the Palestinian people in U.S. history, of more than 100,000 people.

ANSWER, which at its core included a partnership between Arab and non-Arab activists, fought a long and successful battle against excluding the Palestinian struggle for self-determination from the anti-war and peace movement. In the years since, we have mobilized across the country to stop the repeated assaults against and massacres of the people of Gaza.

Most recently ANSWER lead a march of 50,000 people in Washington, D.C. on August 2, 2014 to protest the Israeli massacre against people in Gaza.

We are actively fighting against the ongoing occupation of Afghanistan, the renewed assaults on Iraq and Syria, the drone attacks on Yemen, Pakistan and Somalia, among others.
In recent years, March Forward!, an affiliate of the ANSWER Coalition, has brought together anti-war veterans and active-duty service members to fight for their rights and oppose U.S. wars of aggression.

ANSWER has played an important role in the fight against racist and religious profiling, in support of immigrant and workers’ rights, and for economic and social justice for all. Our members are engaged in a range of struggles, from the local battles against police brutality to the international campaigns against militarism and war.

ANSWER Chapters are organizing in cities and towns throughout the United States connecting the flight for social justice at home and in opposition to war and occupation abroad.