Wagging the Elephant by Anthony Freda 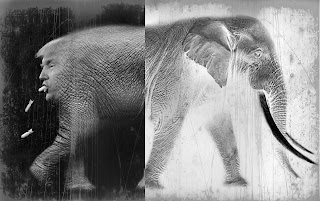 Despite evidence that the gas attack in Syria was a false flag operation designed to demonize Assad and pave the way for another regime change like the ones we saw Bush carry out in Iraq and Obama in Libya, Assad was attacked.

There was no investigation into the attack, which clearly could not benefit Assad in any way, and it presented his enemies with a bullet-proof pretext to bomb him.

The baton has been handed to Trump to continue the policy to overthrow Russia's allies in the Middle East laid out in the aftermath of 9-11 by the Neocons.

Disgracefully, the U.S. bombing of Syria is the one thing that Trump, the mainstream media, Neocons, and establishment Democrats like Pelosi, Schumer and Clinton can agree on.
Yesterday, Hillary Clinton called for the Trump administration to bomb Syrian air fields during an interview at the Women of the World Summit in New York.

“I still believe we should have done a no-fly zone,” she said. “We should have been more willing to confront Assad.”
“Assad has an air force, and that air force is the cause of most of these civilian deaths as we have seen over the years and as we saw again in the last few days,” Clinton stated.
“And I really believe that we should have and still should take out his air fields and prevent him from being able to use them to bomb innocent people and drop sarin gas on them,” she said, raising her voice to applause.


Clinton said that she favored a more aggressive action against Assad, adding that not taking a tough stance on the Syrian president was one of her worst policy mistakes during her time as secretary of state under President Obama.

Her comments came in her first interview since losing the presidential election to Trump and hours before the U.S. launched cruise missiles targeting a Syrian airfield in response to the deadly gas attack.
What amazing timing.

Well one thing is for sure, this bombing puts the conspiracy theory that Trump is working for Putin finally to rest.