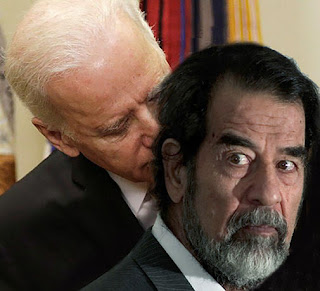 Both maniacs running are pro-war, but why does one get a pass for his Iraq War record? Why is war such a small part of the debate?

Did you know that Biden promoted the false claims of WMD’s and wanted an invasion of Iraq before Bush ? Here are the facts:

It is difficult to over-estimate the critical role Biden played in making the tragedy of the Iraq war possible. More than two months prior to the 2002 war resolution even being introduced, in what was widely interpreted as the first sign that Congress would endorse a U.S. invasion of Iraq, Biden declared on August 4 that the United States was probably going to war. In his powerful position as chair of the Senate Foreign Relations Committee, he orchestrated a propaganda show designed to sell the war to skeptical colleagues and the America public by ensuring that dissenting voices would not get a fair hearing.

As Scott Ritter, the former chief UN weapons inspector, noted at the time, “For Sen. Biden’s Iraq hearings to be anything more than a political sham used to invoke a modern-day Gulf of Tonkin resolution-equivalent for Iraq, his committee will need to ask hard questions – and demand hard facts – concerning the real nature of the weapons threat posed by Iraq.”

It soon became apparent that Biden had no intention of doing so. Biden refused to even allow Ritter himself – who knew more about Iraq’s WMD capabilities than anyone and would have testified that Iraq had achieved at least qualitative disarmament – to testify. Ironically, on Meet the Press last year, Biden defended his false claims about Iraqi WMDs by insisting that “everyone in the world thought he had them. The weapons inspectors said he had them.”

Biden also refused to honor requests by some of his Democratic colleagues to include in the hearings some of the leading anti-war scholars familiar with Iraq and Middle East. These included both those who would have reiterated Ritter’s conclusions about non-existent Iraqi WMD capabilities as well as those prepared to testify that a U.S. invasion of Iraq would likely set back the struggle against al-Qaeda, alienate the United States from much of the world, and precipitate bloody urban counter-insurgency warfare amid rising terrorism, Islamist extremism, and sectarian violence. All of these predictions ended up being exactly what transpired.

Nor did Biden even call some of the dissenting officials in the Pentagon or State Department who were willing to challenge the alarmist claims of their ideologically-driven superiors. He was willing, however, to allow Iraqi defectors of highly dubious credentials to make false testimony about the vast quantities of WMD materiel supposedly in Saddam Hussein’s possession. Ritter has correctly accusedBiden of having “preordained a conclusion that seeks to remove Saddam Hussein from power regardless of the facts and . . . using these hearings to provide political cover for a massive military attack on Iraq.”

Supported an Invasion Before Bush

Rather than being a hapless victim of the Bush administration’s lies and manipulation, Biden was calling for a U.S. invasion of Iraq and making false statements regarding Saddam Hussein’s supposed possession of “weapons of mass destruction” years before President George W. Bush even came to office.

As far back as 1998, Biden was calling for a U.S. invasion of that oil rich country. Even though UN inspectors and the UN-led disarmament process led to the elimination of Iraq’s WMD threat, Biden – in an effort to discredit the world body and make an excuse for war – insisted that UN inspectors could never be trusted to do the job. During Senate hearings on Iraq in September of that year, Biden told Ritter, “As long as Saddam’s at the helm, there is no reasonable prospect you or any other inspector is ever going to be able to guarantee that we have rooted out, root and branch, the entirety of Saddam’s program relative to weapons of mass destruction.”

Calling for military action on the scale of the Gulf War seven years earlier, he continued, “The only way we’re going to get rid of Saddam Hussein is we’re going to end up having to start it alone,” telling the Marine veteran “it’s going to require guys like you in uniform to be back on foot in the desert taking Saddam down.”

When Ritter tried to make the case that President Bill Clinton’s proposed large-scale bombing of Iraq could jeopardize the UN inspections process, Biden condescendingly replied that decisions on the use of military force were “beyond your pay grade.” As Ritter predicted, when Clinton ordered UN inspectors out of Iraq in December of that year and followed up with a four-day bombing campaign known as Operation Desert Fox, Saddam was provided with an excuse to refuse to allow the inspectors to return. Biden then conveniently used Saddam’s failure to allow them to return as an excuse for going to war four years later.

In the face of widespread skepticism over administration claims regarding Iraq’s military capabilities, Biden declared that President Bush was justified in being concerned about Iraq’s alleged pursuit of weapons of mass destruction. Even though Iraq had eliminated its chemical weapons arsenal by the mid-1990s, Biden insisted categorically in the weeks leading up to the Iraq war resolution that Saddam Hussein still had chemical weapons. Even though there is no evidence that Iraq had ever developed deployable biological weapons and its biological weapons program had been eliminated some years earlier, Biden insisted that Saddam had biological weapons, including anthrax and that “he may have a strain” of small pox. And, even though the International Atomic Energy Agency had reported as far back as 1998 that there was no evidence whatsoever that Iraq had any ongoing nuclear program, Biden insisted Saddam was “seeking nuclear weapons.”

Said Biden, “One thing is clear: These weapons must be dislodged from Saddam, or Saddam must be dislodged from power.” He did not believe proof of the existence of any actual weapons to dislodge was necessary, however, insisting that “If we wait for the danger from Saddam to become clear, it could be too late.” He further defended President Bush by falsely claiming that “He did not snub the U.N. or our allies. He did not dismiss a new inspection regime. He did not ignore the Congress. At each pivotal moment, he has chosen a course of moderation and deliberation.”

In an Orwellian twist of language designed to justify the war resolution, which gave President Bush the unprecedented authority to invade a country on the far side of the world at the time and circumstances of his own choosing, Biden claimed that “I do not believe this is a rush to war. I believe it is a march to peace and security. I believe that failure to overwhelmingly support this resolution is likely to enhance the prospects that war will occur.”

It is also important to note that Biden supported an invasion in the full knowledge that it would not be quick and easy and that the United States would have to occupy Iraq for an extended period, declaring, “We must be clear with the American people that we are committing to Iraq for the long haul; not just the day after, but the decade after.”