When I'm 64 by Cindy Sheehan 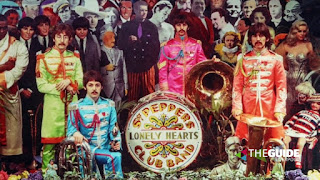 Fifty-four years ago, today, on my 10th birthday, my cousin gave me the record album (for you youngsters, google "record album." Basically, it's something we "dinosaurs" used to listen to music. Albums predate 8-track cassettes, which you will also probably need to google, but this isn't a history of recorded music), Sgt. Pepper's Lonely Heart's Club Band.

As most children my age, I was a big Beatle's fan--having first seen them on the Ed Sullivan Show when I was six!

SPHCB was a wonder to the 10-year old Cindy Miller---it even came with paper dolls of the Beatles! Remember? I still have the album and wish I also still had those dolls.

Why is this record on my mind today, of all days? Because there was a peppy, cute song on it, sung by Paul McCartney called, "When I'm 64."

Well, today, marks my 64th birthday. There is so much water under my proverbial bridge.

In 1967, the 10-year old Cindy Miller lived in a country that was ravaging Vietnam, just 4-years past the assassination of JFK, but Robert Kennedy and Martin Luther King, Jr were still alive. These major events touched me in a way that I think most children with a decade under their belts today aren't.

The television was the most important piece of furniture in our homes, and with only a few broadcast channels, we did watch the evening news and the images from Vietnam were frightening---and as a child of the Cold War, most of my recurring nightmares included mushroom clouds.

However, my 10th birthday was my Star Birthday (when the date matches your age) and I was still innocent and naive.

I heard the song "When I'm 64" and couldn't even imagine being that ancient, or how much heartache one body could take and still survive--because the song mentions grandchildren (the greatest joy of my life) and vacations on the Isle of Wight, but not sons coming home from US imperialist wars in body bags.

Now, of course, I think 64 is pretty young, and despite the enormous sorrow and great joys, (and 17 months of bizarro covid policies), I have good health.

I always say, "Any day is a good day when you wake up on this side of the dirt."

Today, I will try and stay cool in sweltering 110 degree heat, but, as always, I will keep fighting US imperialism in any way possible.