TOPIC: Can the USG ever be trusted?

Cindy and John chat about the current global situation and how being skeptical of USG/global elite propaganda is a very necessary and healthy way to live. Who are the shadowy forces behind the war/pharma profiteer attacks on the working-class? 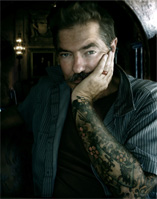 John Steppling is an original founding member of the Padua Hills Playwrights Festival, a two-time NEA recipient, Rockefeller Fellow in theatre, and PEN-West winner for playwrighting. Plays produced in LA, NYC, SF, Louisville, and at universities across the US, as well in Warsaw, Lodz, Paris, London and Krakow. Taught screenwriting and curated the cinematheque for five years at the Polish National Film School in Lodz, Poland. Plays include The Shaper, Dream Coast, Standard of the Breed, The Thrill, Wheel of Fortune, Dogmouth, and Phantom Luck, which won the 2010 LA Award for best play. Film credits include 52 Pick-up (directed by John Frankenheimer, 1985) and Animal Factory (directed by Steve Buscemi, 1999). A collection of his plays was published in 1999 by Sun & Moon Press as Sea of Cortez and Other Plays. He lives with wife Gunnhild Skrodal Steppling; they divide their time between Norway and the high desert of southern California. He is artistic director of the theatre collective Gunfighter Nation.

AESTHETIC RESISTANCE AND
DIS-INTEREST. THAT WHICH WILL NOT ALLOW ITSELF TO BE SAID
Author: John Steppling