As former Secretary of State in the Clinton administration, she enthusiastically defended the brutal sanctions imposed on Iraq which resulted in the death of as many as 576,000 children.
In 1996 she defended the murderous sanctions during a 60 Minutes interview when she declared “we think the price is worth it.”

The sanctions achieved nothing but the mass death of children and the suffering of innocents.

Now she says there is special place in Hell for women who don't vote for Hillary.

I hope there is a special place in Hell for Her. 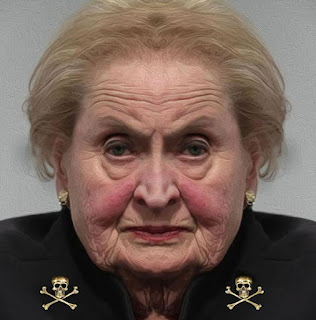