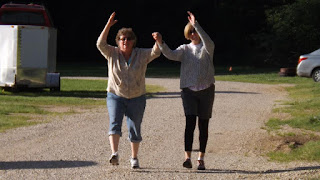 Christy Miller, known to all family and friends as “Dede” joined her parents, Dennis and Shirley Miller and beloved nephew, Casey Austin Sheehan in infinite peace on January 22, 2017, after a protracted illness.

Dede began this life on June 16, 1958 in Inglewood Ca. Shortly thereafter her family relocated to Bellflower CA where Dede loved to play softball and music and graduated from Bellflower High School in the class of 1976.

For 25 years, Dede worked at the Bellflower Kmart as Human Resources manager until she quit to work full-time for the peace and social justice movement after her nephew Casey was killed in Iraq in 2004.

Dede will be remembered for her quick sense of humor and zest for life. She traveled the world with sister Cindy in her quest for peace and remarked “I’ve had a wonderful life” shortly before her transition.

Dede will be missed by many, but especially by those family members that survive her: sister Cindy Sheehan of Vacaville CA; brother Scott Miller of Bellflower CA; brother-in-law Patrick Sheehan of Fairfield CA; niece Carly Sheehan of Novato CA; nephew Andy Sheehan and niece Jane Henry both of Vacaville. In the final two years of her life, Dede found great joy and comfort in her great nieces and nephews: Jonah, Jovie, Jackson, Jillian Henry; and Cohen Sheehan, all of Vacaville. The friends and people she had a positive influence on and touched profoundly in her too short life are too numerous to list.

Dede was in home hospice care for her last days and was surrounded by love, peace, and her beloved family at all times.

Dede loved animals and when she needed a distraction from the cancer "treatments" and pain, she spent many hours watching the antics of the Lone Star Dog Rescue Ranch.

In lieu of flowers, we request that you make a donation there in Dede's memory.